For the Nth time have found myself referring back to an exceptionally vivid infographics on how many Ukrainians have ever been abroad: 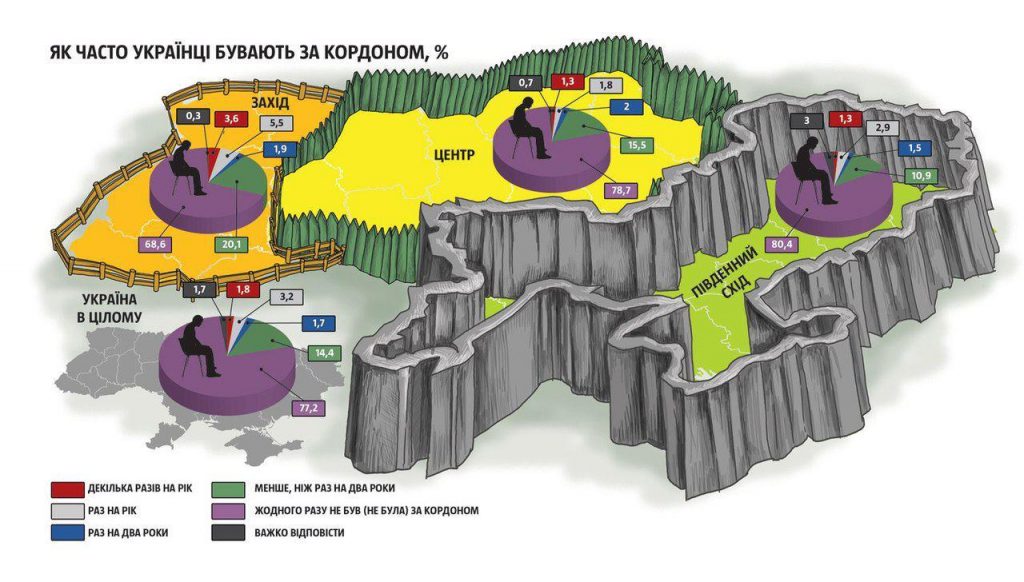 There are three parts of the country represented on the picture — the West, Center, and South-East. The colour code is as follows:

It was a staggering revelation for me that almost 8 people out of every 10 have never been abroad in their life! Even more, another poll reveals that 37% of people never travelled outside their region (county) within Ukraine!

That data correlates neatly with the hostility or indifference towards the EU integration as well. In the west we see about 11% of people are regularly travelling abroad and support there for EU integration is the strongest. Compare this with a meagre 5-6% in the East with the most vocal opposition towards Europe. Indeed, the less people know the easier it is to manipulate them.

Okay, you’d think Murphy laws were jokes. But as situation in Ukraine shows most of them are true, aren’t they?

All of this really saddens me and spoils good faith in further; but it does demonstrate the essence of real world and people’s desires. Turning though from harsh reality to wonders of virtual world, let’s start with few reminder links:

The open office was originally conceived by a team from Hamburg, Germany, in the nineteen-fifties, to facilitate communication and idea flow. But a growing body of evidence suggests that the open office undermines the very things that it was designed to achieve. In June, 1997, a large oil and gas company in western Canada asked a group of psychologists at the University of Calgary to monitor workers as they transitioned from a traditional office arrangement to an open one. The psychologists assessed the employees’ satisfaction with their surroundings, as well as their stress level, job performance, and interpersonal relationships before the transition, four weeks after the transition, and, finally, six months afterward. The employees suffered according to every measure: the new space was disruptive, stressful, and cumbersome, and, instead of feeling closer, coworkers felt distant, dissatisfied, and resentful. Productivity fell.

When the Avatar was first released I was appalled by claims that it was touted as ‘totally original work from the mind of Cameron’. I was sure that many years ago I read strikingly similar story by some of well-known sci-fi writers, but was struggling to remember the name of either the novel or the author. There was the same paraplegic hero who telepathically connected with an artificially created life form in order to explore a harsh planet and get access to its resources. Doesn’t it sound similar to the Avatar’s plot?

Recently I accidentally stumbled upon this novel — that was Poul Anderson’s Call Me Joe, written in (!) 1957. This is a classic sci-fi masterpiece and I would recommend reading it any time.